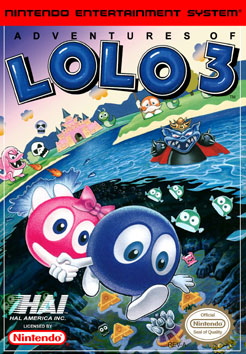 Representing the third American release based on the Japanese Eggerland series, The Adventures of Lolo 3 (Buy on eBay) included many new aspects to the entertaining puzzle game. After living peacefully for many years, the new King of Eggerland launches a capsule filled with a strange potion to turn all of the inhabitants of Eden into stone. Only Princess Lala and Prince Lolo remain unharmed and it is up to them to defeat the new evil king and restore their friends.

For this installment, you can play as either Lala or Lolo, although each has the same abilities. There is a new world map, which allows some optionality in the game path through 100 different puzzle rooms. Several levels now contain a boss battle. Crumbling bridges which can only be crossed twice and new enemies called Mobies are introduced to add new possibilities for the puzzle rooms.