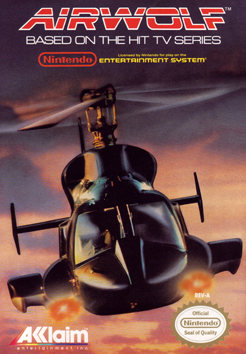 Airwolf (Buy on eBay) was a video game for the Nintendo Entertainment System based on a television series which originally aired from 1984 to 1987. The series centers around an advanced prototype supersonic helicopter and a pilot named Stringfellow Hawke. In the game Hawke must fly the Airwolf to a series of POW camps to rescue the prisoners being held captive.

There are a total of 20 different missions within the game. The Airwolf is equipped with machine guns and heat-seeking missiles. Besides rescuing the prisons, the player must also periodically refuel, repair, and replenish missiles at Refueling Stations. In order to complete a mission, the player must rescue all prisoners and bring them to the border.