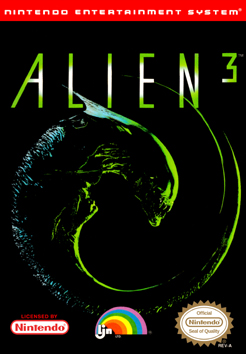 The Alien 3 (Buy on eBay) video game for the Nintendo Entertainment System was loosely based on the film released in 1992. Ripley and other crew members crash land on the planet Fiornia 161, which serves as a maximum security prison. Ripley has also inadvertently brought the aliens to the planet. It is up to her to rescue the captives and destroy the aliens.

In the movie, Ripley must accomplish her mission without any weapons since they are banned on the planet. Within the video game, however, she is armed with a pulse rifle, flame thrower, grenade launcher, and hand grenades. Each stage must be completed before a timer expires or aliens will burst out of the prisoner’s chests!