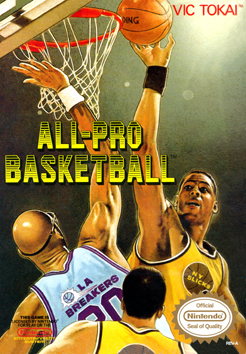 All-Pro Basketball (Buy on eBay) was a video game released in 1989 for the Nintendo Entertainment System. It featured eight different teams, which seem to have been loosely based on actual NBA teams. This included the New York Slicks, Chicago Zephyrs, Boston Redcoats, Los Angeles Breakers, Dallas Stallions, Phoenix Wings, Seattle Sonics, and San Francisco Bayriders. The game can be played alone against the computer, two player co-op against the computer, two player head to head, or in watch mode.

The view of the court during game play was vertical, focused on only one side of the court at a time. When players crossed the half-court line, the view of the court would flip so that the offense was always shooting at the top of the screen. The game also featured animated cut scenes whenever a player attempted a dunk.