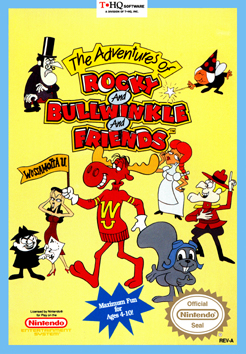 The Adventures of Rocky and Bullwinkle and Friends (Buy on eBay) was a video game for the Nintendo Entertainment System based on television program originally aired from 1959 to 1964. The premise for the game is that Rocket J. Squirrel and Bullwinkle J. Moose have received a telegram informing them that Bullwinkle’s late great-great grandfather had willed him an estate, making him Bullwinkle the Earl of Moosechester. He must travel from Frostbite Falls, Minnesota to England to inherit his windfall. Unfortunately, the two villians Boris Badenov and Natasha Fatale plan to impersonate Bullwinkle to claim the inheritance first.

During game play, you can switch between Rocky or Bullwinkle at any time to utilize their special abilities. Rocky can fly and Bullwinkle can ram into enemies. You must travel through five game levels and collect bombs along the way, but you should avoid Goof-Gas bombs which reverse the left and right controls.