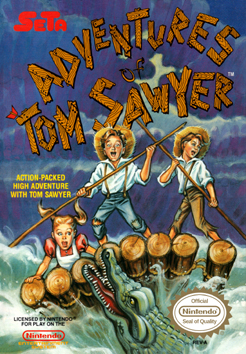 The Adventures of Tom Sawyer (Buy on eBay) is a platform video game for the Nintendo Entertainment System based on the famous 1876 novel by Mark Twain. Tom is daydreaming while in a one room school house on the banks of the Mississippi River and the entire game apparently takes place within one of his dreams. He must travel through six stages to save Becky from his enemy Injun Joe.

The game begins on an abandoned pirate ship where he must defeat pirates and an octopus monster. This is followed by a journey down the river to fight a monstrous alligator, through the forest to fight a giant monkey, in a haunted house to fight a demon, in the sky to fight a giant airship, and finally deep in a cave to fight Injun Joe. At the end Tom will wake up, but find three feathers from Injun Joe leading to the question: Was it really a dream!?